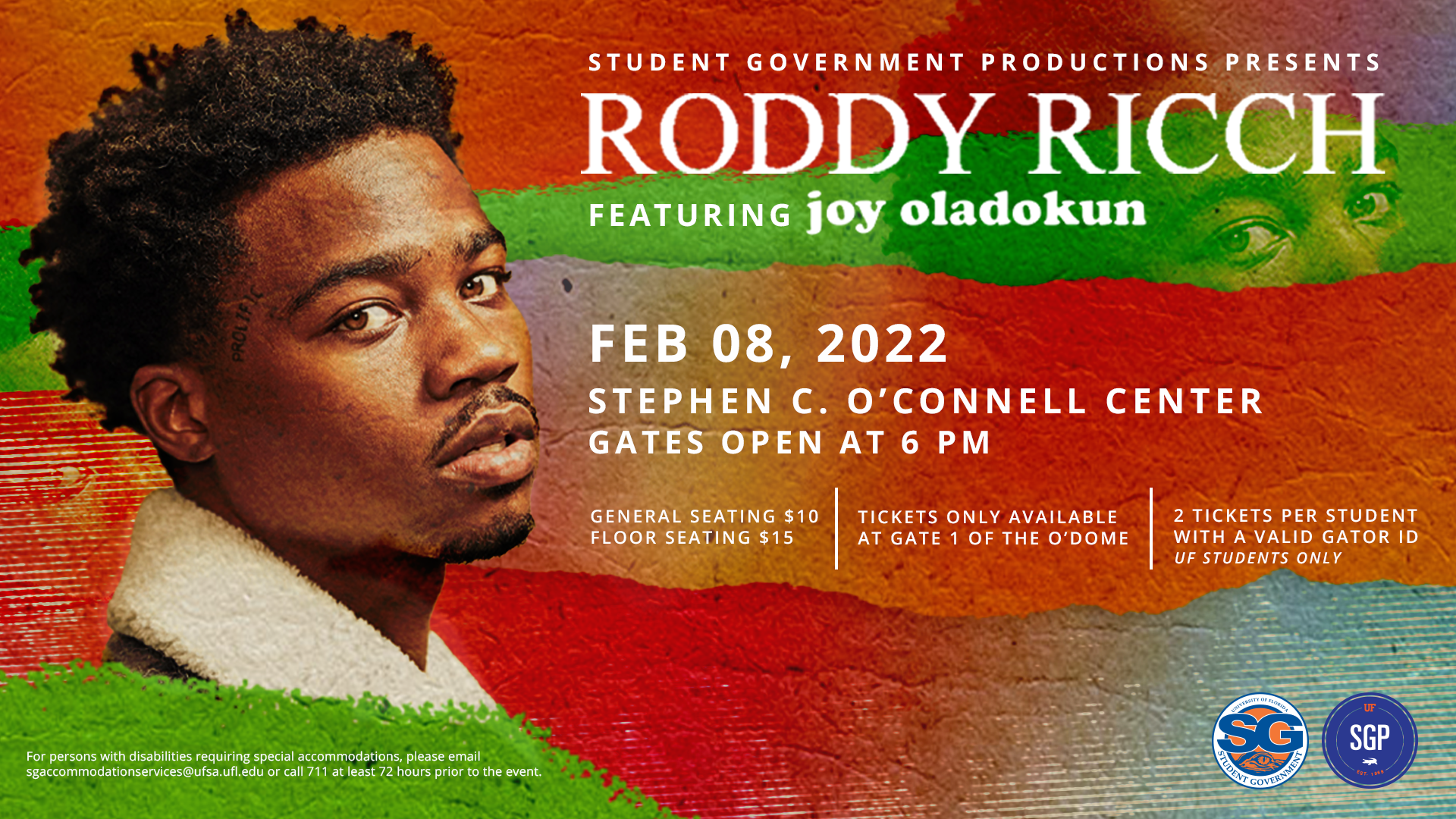 WHEN AND WHERE IS THE EVENT?
Tuesday, Feb. 8, 2022 at 7:00pm in the Stephen C. O’Connell Center. Doors will open at 6:00pm.
DO WE HAVE TO WEAR A MASK?
Masks are expected indoors.
CAN ANYONE ATTEND THE SHOW?
YES! As of 2/2/2022, we have decided to make this show available to the general public. General public tickets can be purchased here for $20 after taxes.
Do students get a discount?

YES! Student tickets will still be available for $10 at Gate 1. Students must go to Gate 1
and present their Gator1 ID to get this discount.

WHAT CAN WE BRING IN?
Students must follow the rules of the Stephen C. O’Connell Center. Those can be found here.
HOW MUCH DO TICKETS COST?
Prices will vary from $10 to $20 for UF students and general public seating.
HOW DO I GET A SPOT IN THE PIT?
Pit seats will be located on the floor of the O’Connell Center and will be received upon request from the gate at checkout. These will be first come, first serve basis.
ARE THERE ANY ONLINE MOBILE TICKET SALES?
Mobile online tickets are available for those who purchase through Ticketmaster.
CAN I GET A MEDIA PASS?
Please submit a request for a media pass by February 1st. Media pass requests, made
by credible media sources, are subject to approval by the artists. If approved, instructions for media credentials will be provided to the email address in which the
request originated from by February 8th.
WILL THE EVENT BE BROADCASTED?
No. No livestream or broadcast of this event is permitted.
ARE THERE ACCOMMODATIONS FOR PERSONS WITH DISABILITIES?
Of course. Please email sgaccommodationservices@ufsa.ufl.edu or call 711 at least 72 hours prior to the event.

Praised by Pitchfork as “the West Coast’s premier melodic storyteller,” Compton-based MC Roddy Ricch collected 6  nominations during the 63rd GRAMMY® Awards, including Record of the Year (“Rockstar” by DaBaby ft. Roddy Ricch), Song of the Year (“The Box”), and Best Melodic Rap Performance and Best Rap Song for both “Rockstar” and “The Box.” After performing at the 2020 BET Awards, Ricch came home as the winner of Best New Artist and Album of the Year while also winning Favorite Rap/Hip-Hop Album at the 2020 American Music Awards.

His major label debut album, PLEASE EXCUSE ME FOR BEING ANTISOCIAL, made an explosive chart debut upon its December 2019 release, arriving at #1 on Billboard 200 while also topping the Top R&B/Hip-Hop Albums and Top Rap Albums. Roddy dominated the charts on all fronts as he maintained both the #1 song and #1 album in the country for three nonconsecutive weeks. His breakout single “The Box” is 7x certified platinum with over 1 billion US streams to date. The single ruled at #1 on the Billboard Hot 100 for 11 consecutive weeks and made a mark on the Hot R&B/Hip-Hop
Songs and Hot Rap Songs charts. Ricch scored a second #1 song on the charts with his feature on DaBaby’s hit single “Rockstar,” replacing himself as #1 on the Billboard Hot 100.

With her major label debut album, in defense of my own happiness, JOY OLADOKUN is forging her own path, sharing the unique perspective she’s gained from living in today’s world as a black, queer woman and first-generation child of Nigerian immigrants. Born in Arizona and now living in Nashville, her musical exploration began at age ten when she was inspired to learn guitar after seeing a video of Tracy Chapman — the first time she’d ever seen a black woman play the instrument. The new record, which features collaborations with Maren Morris, Jensen McRae and Penny & Sparrow, has been named one of the “Best Albums of 2021 So Far” by Variety and Rolling Stone, who proclaims, “a serious talent with a kind of low-key, casual ease…she’s always seeking out the light to point the way, making for one of the year’s most uplifting listens.” Additionally, NPR Music declares, “She has a remarkable ability to distill how forces at work in the world…she can make even social and political protest feel like an intimate, warmly human act.”