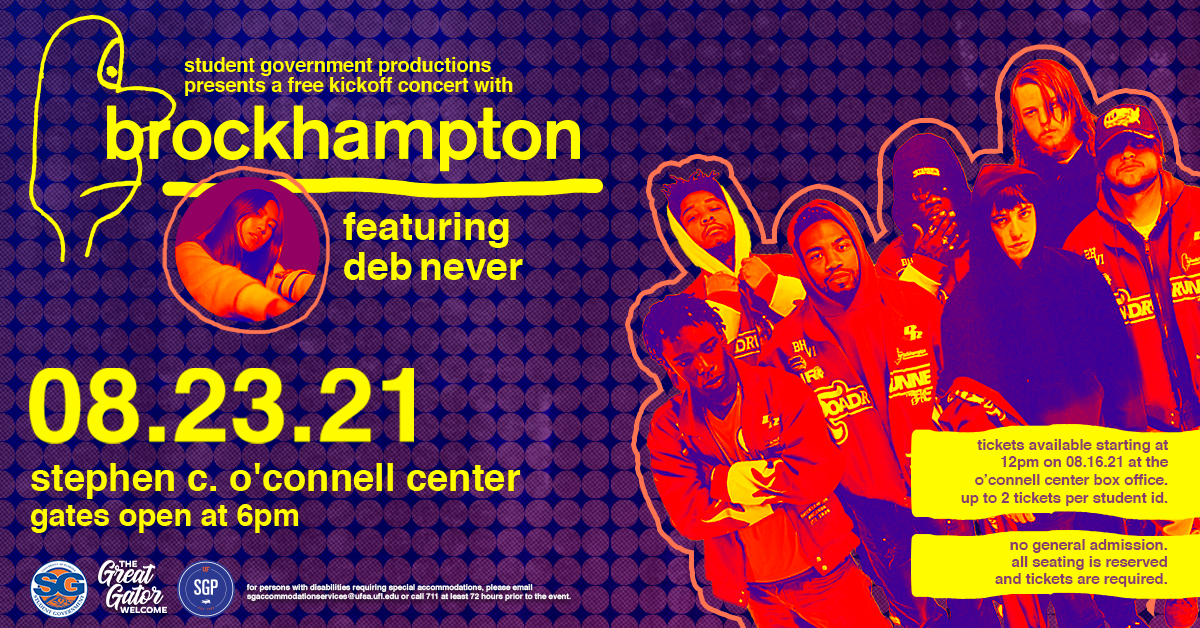 When and where is the event?
Monday, August 23rd at the Stephen C. O’Connell Center. Gates open at 6pm.
Do we have to wear a mask?
As this is an indoor event, masks are expected per UF guidelines.
How much do mobile tickets cost?
Mobile Tickets are completely FREE for all UF students. No resales. All sales are final.
So do we still need a mobile ticket if it’s free?
Yes, this is the only way to get into the event. All seating is reserved. You will be given a seat number after receiving a mobile ticket.
Is this show general admission?
No, all seating is reserved per your mobile ticket.
When do mobile tickets become available? Will they be available for only 1 day?
Mobile Tickets are available beginning Monday, August 16th at noon EST. These will be available up until the day of the show (Aug. 23rd) or until mobile tickets sell out!
I’m moving in late and won’t be in Gainesville for the mobile ticket release date. What should I do?
Don’t worry! Mobile Tickets will be available beginning Aug. 16th and until doors open for the event on the 23rd. However, demand is high and mobile tickets may sell out before the date of the event. Please plan accordingly!
Where can I get mobile tickets?
Gate 1 Box Office of the O’Connell Center during normal box office hours 12-5pm, Mon-Fri. Sales begin Aug. 16th at noon EST.
Can I pick up mobile tickets for my friends?
You can receive up to 2 mobile tickets per Gator1 ID and can bring your friends ID’s as well! Your friends must also be UF students with valid Gator1 IDs.
Can anyone attend?
This show is strictly limited to UF students only. No outside guests or general public. You must have a valid Gator1 ID to attend. UF IDs will be scanned upon entry.
Are there any online mobile ticket sales?
No mobile tickets are available online. You must visit the box office to show your ID and be issued mobile tickets as there will be no hard tickets for this event. After that, you can then transfer mobile tickets to your friends via the Ticketmaster mobile app. Learn how to transfer tickets here.
Can I get a media pass?
Please submit a request for a media pass by Monday, August 16th. Media pass requests, made by credible media sources, are subject to approval by the artists. If approved, instructions for media credentials will be provided to the email address in which the request originated from by Friday, August 20th.
Will the event be broadcasted?
No. No livestream or broadcast of this event.
What can be brought into the concert?
Students must follow the rules of the Stephen C. O’Connell Center. Those can be found here,
https://www.oconnellcenter.ufl.edu/general-information/security-policies/
Are there accommodations for persons with disabilities?
Of course. Please email sgaccommodationservices@ufsa.ufl.edu or call 711 at least 72 hours
prior to the event.

Originally formed as “AliveSinceForever” in 2010, current members of BROCKHAMPTON began making music after founder Kevin Abstract made a post to an online fan forum for Kanye West with the subject titled, “Anybody want to build a band?”. In 2015, they rebranded themselves as BROCKHAMPTON. After this, they recruited additional members and now have 13 unique individuals, all bringing something valuable to the band.

BROCKHAMPTON released their first mixtape, “ALL-AMERICAN TRASH” in 2016 and then their first debut studio album, “SATURATION”, a year later. This was a trilogy that led up to their record deal with RCA Records in 2018. Some of the most recognizable songs on these albums include “FACE”, “SWEET” and “BLEACH” which have all been streamed over 100 million times on Spotify since their releases. In September of 2018, they released their fourth album, “iridescence” and hit No. 1 on the Billboard 200 album chart. Since then, they have released two more studio albums and been on tour worldwide.

DEB NEVER is a vocalist who got her start in 2017 posting solo videos online, which got her signed to WeDidIt Records. In 2019, NEVER was featured in BROCKHAMPTON’S song, “No Halo” and began performing with the group occasionally. Simultaneously, she was also working on an EP at this time titled “House on Wheels,” a collection of light trap-pop rhythms. NEVER now has almost 500,000 followers on Spotify and continues to grow.