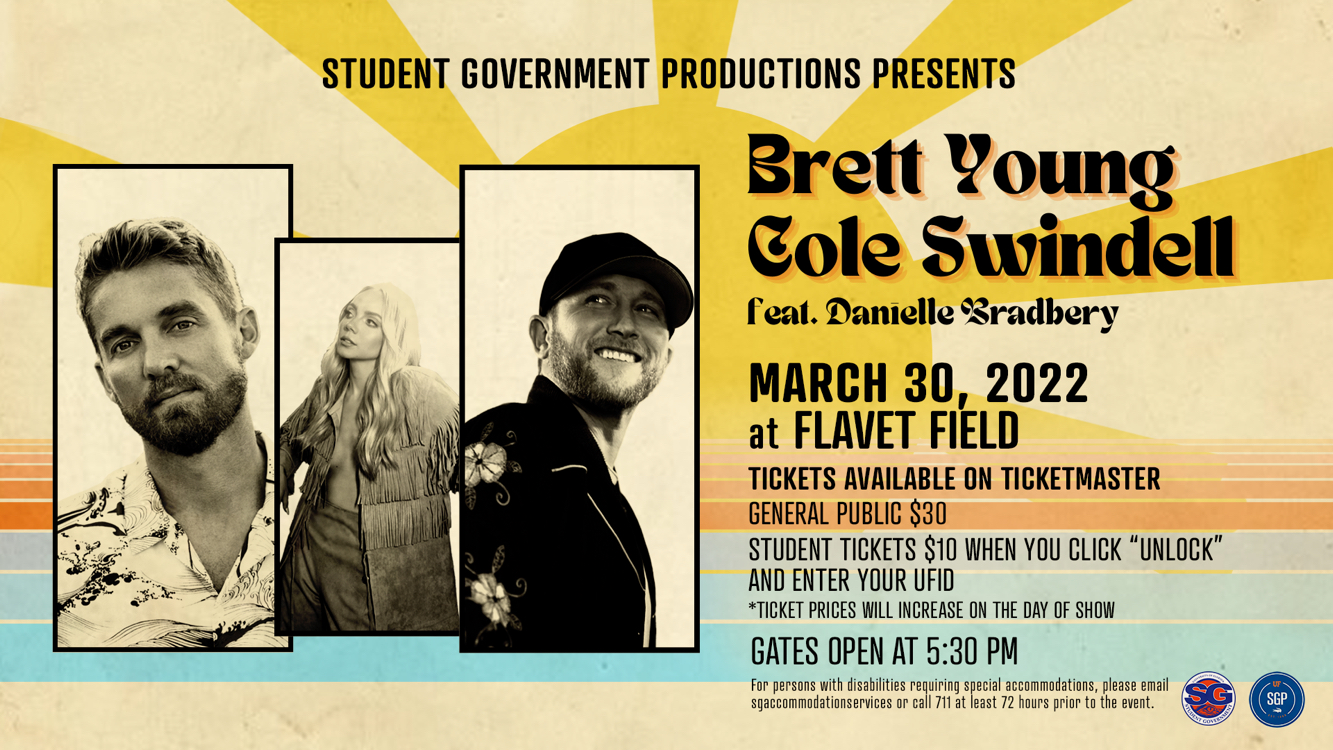 **Please be mindful of the constant construction along Museum Rd. Subject to change. 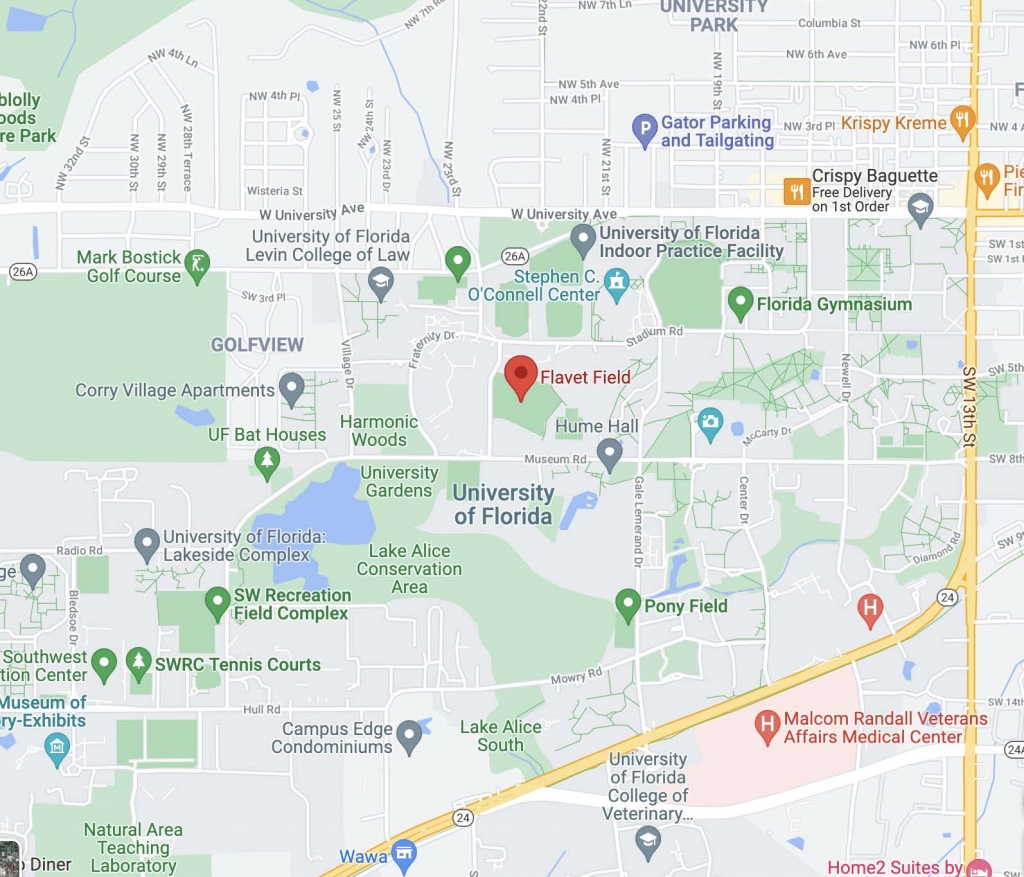 Where can I park?
Although Flavet Field does have a parking lot, all UF parking will be lifted at 4:30 pm.
We encourage students living on campus to walk or be dropped off.
Do we have to wear a mask?
Masks are recommended at this time, but not required.
Do students get a discount?
YES! Student tickets will be available for $10 via Ticketmaster. When instructed to purchase, click “unlock” and enter your UFID.
Can anyone attend the show?
YES! The event is open to the public.
WHAT CAN'T WE BRING IN?
Prohibited items:
– Outside food or drink
– No outside bags
– Alcohol
Can I leave and come back?
No, you are not permitted to leave the venue and return.
Will there be food available?
Yes! We will have a variety of food trucks set up during the event that will be charging for food.
HOW MUCH DO TICKETS COST?
$10 for UF students and $30 for the general public, all tickets are general admission.
Where can I buy tickets?
Tickets can be purchased at Ticketmaster.
For students, can we still get two tickets with one UFID?
Yes, same as it was previously at the box office but instead via Ticketmaster.
ARE THERE ANY ONLINE MOBILE TICKET SALES?
Mobile online tickets are only available for those who purchase through Ticketmaster. Students will receive a discount on this platform.
CAN I GET A MEDIA PASS?
Please submit a request for a media pass by Friday, March 25th to sgp@sg.ufl.edu. Media pass requests, made by credible media sources, are subject to approval by the artists. If approved, instructions for media credentials will be provided to the email address in which the request originated from by Tuesday, March 29th.
WILL THE EVENT BE BROADCASTED?
No. No livestream or broadcast of this event is permitted.
ARE THERE ACCOMMODATIONS FOR PERSONS WITH DISABILITIES?
Of course. Please email sgaccommodationservices@ufsa.ufl.edu or call 711 at least 72 hours prior to the event.

For any further questions, please contact Student Government Productions Chairman Jake Siegel at sgp@sg.ufl.edu and check out @ufsgp on social media for any show updates.

Young has captured the hearts of fans everywhere through his honest lyrics and West Coast-meets-Southern sound, aptly dubbed “Caliville” style. With an undeniable string of hits and two albums defined by a transcendent romantic spark, he has cemented his status as Country’s master over matters of the heart. The star broadened his emotional scope on WEEKENDS LOOK A LITTLE DIFFERENT THESE DAYS following his GOLD-certified sophomore effort TICKET TO L.A., which debuted atop the Billboard Country Albums chart. Young’s PLATINUM self-titled debut dominated the Top 20 on the Country Albums chart for 37 weeks and has contributed to 5.5 billion streams globally. He was named ASCAP’s 2018 Country Songwriter-Artist of the Year for his “melodic craftsmanship” (Billboard) and has also garnered nominations from ACM, Billboard, Teen Choice, CMT and CMA Awards. Racking seven consecutive No. 1 hits, Rolling Stone deemed Young “one of country’s most consistent radio stars.”

Singer-Songwriter Cole Swindell is one of the pioneers of breezy-country pop that first became popular in the 2010s. He first rose to fame as a songwriter when he wrote “Roller Coaster” for fellow Georgia Southern Alumni, Luke Bryan. His talents led him to write songs for artists such as Thomas Rhett, Scotty McCreery, and Craig Campbell. As his songs rose on the country music charts, Swindell began his own climb as a singer with songs like “Chillin’ It,” “Hope You Get Lonely Tonight,” “Ain’t Worth the Whisky,” “You Should Be Here.” “Chillin’ It” reached No. 1 on Billboard’s Hot Country Songs chart and even crossed over to No. 28 on the pop Top 40. This single propelled Swindell into mainstream. He has since released 3 albums with Warner Bro Records Nashville including his new album “Stereotype” which is currently available for pre-order.

Powerhouse vocalist Danielle Bradbery has come a long way since kick starting her career at just 16-years-old as Season 4 winner of NBC’s The Voice and becoming the youngest artist to win in 2013. She continued her career evolution with her sophomore album “I Don’t Believe We’ve Met.” Her powerful, sensitive voice has been described as “amber” and many of her albums feature her own heartfelt and personal stories. She has collaborated with many artists such as Thomas Rhett, Diplo, Parker McCollum and Zac Brown as well as singing “Blackout” from the Charlie’s Angels soundtrack. Her current album, IN BETWEEN: THE COLLECTION (Big Machine Records) featuring 10 tracks representing the different chapters in Danielle’s musical journey, including brand new track “Look At The Mess I’m In,” and “Stop Draggin’ Your Boots” as well as the heart-wrenching “Break My Heart Again.” Many of her songs have reached the charts with “Stop Draggin’ Your Boots” currently being at the top of the country charts. Bradberry has earned multiple award nominations and toured across the globe with Kane Brown, Blake Shelton, Brad Paisley, Miranda Lambert, and many more.